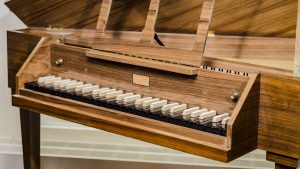 Understanding that our modern instruments are different from the instruments composers wrote music for can help the performer understand the music they are playing better and improve their performances.

Why Do Performances Have to be Accurate?

The argument against playing on period instruments is that our modern instruments just sound better. If you are an early music enthusiast, you may not agree, and that’s fine. We all have our opinions and music is very subjective.

There is a certain degree of nuance that historically accurate music takes on that makes it interesting to listen to. Even if you choose not to play on a period instrument, the style of the music should still be adhered to. This style can be heavily influenced by the instrument the composer had access to at the time. This is one reason it’s important to learn about the differences in instruments.

The organ has been around in some form or another since at least the 3rd century. It is, as far as we know, the oldest of keyboard instruments. There are volumes of information that could be presented to talk about how organs work and their history. For the purpose of this article we’ll look at the organ in just a very general sense to get an idea of how they typically work.

Pipe organs can be small or they can be extremely large with even more than 10,000 pipes. Why are there so many pipes? The organ has set up pipes called “ranks” which are organized by timbre. For example one rank of pipes may make a sound similar to a clarinet, whereas another rank of pipes would sound closer to a trumpet.

On many organs there are multiple keyboards, also called manuals, from where these pipes are controlled. “Stops” are used to control which ranks the keyboard controls. Each keyboard can control one or multiple ranks at one time. Stops are usually knobs or levers that are controlled by the performer.

For example, if you play “C” on the keyboard, it could send air (often referred to as wind) through the clarinet set of pipes and also the trumpet set of pipes, or any number of other set of pipes to make a very large sound.

Dynamics on a Pipe Organ

There are two major ways to make dynamics on a pipe organ. Pressing a key down harder does not change how loud or soft the organ is like it does on a piano.

The organ also has an expression or swell pedal. Many organ pipes are commonly enclosed within wooden boxes. Shutters, kind of like blinds for your windows, are on the outside of these boxes. The expression pedal controls these shutters making the sound louder and softer.

The first documented case of a harpsichord was in the 14th century. The harpsichord is much more similar to a piano than an organ. It looks very similar to our modern-day piano as you can see below.

Instead of using pipes and air to make sound, the harpsichord uses strings. When a key is pressed, a mechanism called a jack moves up. The jack has a pick attached to it, this pick is called a plectrum. When the jack is moved up the plectrum then literally plucks the string.

Dynamics on a Harpsichord

Similar to the organ, the harpsichord does not play louder or softer depending on how hard you strike the key. The harpsichord also has stopped. Different stops create slightly different timbres and tones. These stops are often connected to different sets of strings as well. The stops can be combined to create a louder sound or just used individually.

The double-manual harpsichord (two keyboards) was invented so that one keyboard would be loud and the other soft. Other than controlling the stops or playing on different keyboards there is no real control over dynamics. Crescendos and diminuendos are impossible.

There have been some recent studies that show that there may be slight alterations in dynamics by fingers alone, but it is not significant enough to be of much musical worth. Because of this, dynamics on the harpsichord are often referred to as “terraced dynamics”. This means that a soft sound could be played with a soft stop and a louder sound could be played with louder stops.

Unlike the organ, when a note on the harpsichord is played, it does decay. It decays pretty quickly too. The harpsichord is not an especially loud instrument, so notes tend to fade faster than they do on the piano. In addition to stylistic reasons, harpsichord music often had trills and other ornamentation on single long notes, so that they could be heard for longer without decay.

Bartolomeo Cristofori invented the piano in 1700. In Italian, forte means loud and piano means soft. Cristofori originally called it the “harpsichord that could play loud and soft” which was later shortened to either fortepiano or pianoforte. Today we call it a piano. The piano of Cristofori’s time was a little different than our modern version however.

It looked very similar to a harpsichord. The major difference was the mechanism used to play the notes. Instead of the jack and plectrum plucking the strings, the fortepiano has a small hammer that hits the strings. Hitting the strings makes a much different sound than plucking. Hammers also the piano to play dynamics using the keyboard alone.

The original fortepiano did not have pedals like we know of today. It had stops similar to the harpsichord and keyboard stops. These stops were later turned into knee levers, and they finally evolved into our present day piano pedals. Unlike the organ and harpsichord, the stops did not change the timbre of the instrument. The stops served the same function as our piano pedals today.

Finally, the striking point, or where the hammer hits the strings, is different depending on what part of the keyboard you’re playing on. The lower bass notes have a different timbre than the notes in the middle of the keyboard, and the notes higher up on the keyboard have an even different sound. Hearing the differences will likely help more than only reading about them.

Why Does This All Matter?

Bach wrote for the harpsichord and the organ. He did get to play on an early fortepiano near the end of his life, but he didn’t like it. Because his music wasn’t written for the piano, we need to understand what he had intended the music to sound like when he wrote it. There were no damper pedals and likely not a whole lot of dynamics either. The notes could either be held out indefinitely, like on the organ, or decayed very quickly like on the harpsichord.

Mozart wrote music for an instrument where there were no pedals at all. He had just a knee lever to use to raise the dampers. He did use it of course, and expected it to be used at times, but it wasn’t all encompassing like ours are today.

The style of music was affected by the time and the style other instruments were playing in, but it was also highly influenced by the abilities of the instrument. Just about every other instrument in Bach’s day could play dynamics. If his instrument was capable of dynamics, would he have expected to hear them in performances? That’s an answer you have to come up with yourself.

I could go on and on about specific examples of music of why understanding the history of the piano is important for performance, but it is a little out of the scope of this article. For now, you should take this information and try to apply it for yourself. Look at music by these composers through a “period” lens and see how it changes your performance.

If you ever get a chance to play on an organ, a harpsichord, or an early fortepiano, do it. It’s a great experience, and you’ll have a newfound understanding for composers and the music they wrote.