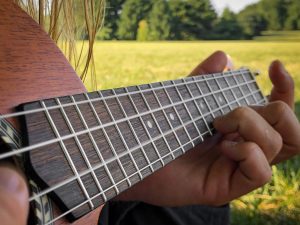 The ukulele is akin to a miniature acoustic guitar. And since it’s one of the easiest stringed instruments to play, many people opt for learning it when starting their musical journey.

While it conventionally has only four strings, over time, enthusiasts began experimenting with adding more to change the way a ukulele sounds.

So, in this article, we’ll tell you how many strings a ukulele can have and discuss the materials from which the strings are made. Without further ado, let’s hop in!

While a standard ukulele has four strings tuned to G-C-E-A (C6 tuning), some models can have five, six, and eight strings.

How Many Strings Can I Find on a Ukulele?

Now, let’s have a look at the different ukulele types based on their string number.

The four-string is the most common ukulele on the market. It’s simple, straightforward, and does a perfect job at producing the signature mellow sound of a uke.

The four strings are tuned to G-C-E-A (also called the C6 tuning). And the G string can be tuned an octave lower or higher depending on your string gauge and material and sound preference.

The five-string ukulele has a double course for the G string that’s tuned an octave apart. A double course is a pair of strings intended to be sounded simultaneously, not played independently. The result is the gG-C-E-A tuning, where the low and high G make your ukulele sound louder and deeper.

Six-string ukuleles are relatively rare, but they have a fascinating tone. They stand out among the other ukes, thanks to their high G and double courses for the A and C strings, which are tuned an octave apart. The result is the g-cC-E-Aa tuning that allows your ukulele to sound louder, brassier, and fuller.

The eight-string uke has one double course for each string. This model also employs both types of tuning: octave and unison. While the G and C string pairs are tuned an octave apart, the E and A are in unison. The result is a gG-cC-EE-AA tuning that allows increased harmonic overtones and makes your ukulele sound rich.

Not only does the number of strings affect the tone of a ukulele, but also the material used to manufacture the strings! So, here are the different types of ukulele strings.

Nylon is one of the most common string materials out there as it produces the warm, gentle tone ukuleles are recognized by. It’s soft on the fingertips, inexpensive, and lasts long. Moreover, holding chords is easier with nylon due to its low tension, so it’s great for beginner players.

The downside to nylon strings is their susceptibility to temperature changes. As a result, they tend to lose their tuning; so if you opted for nylon as the string material, be ready to tune your ukulele often.

Steel strings are a more viable choice if you’re into playing popular or rock music. This is because they’re known for their crisp, vibrating, and sharp sound. However, they’re always under a lot of tension, so you must apply more force to fret them and play the chords properly.

This makes them harsh on the fingertips, and it takes time to get used to them because steel is a durable material. But thankfully, steel strings hold onto their tuning and last a long time. However, you should know they stray from the typical ukulele tone to sound more like a guitar.

Fluorocarbon is another exciting material uke strings are made of. Since it’s the same material used in fishing lines, you’ll find this type of string durable and less susceptible to the elements.

And while it produces a brighter, punchier tone, fluorocarbon has the same flexible nature as nylon. Hence, it’s an excellent option for beginners looking for durability and playability.

Gut is the material ukulele strings were initially made of. It produces the warmest sound and holds onto its tuning for a long time.

However, while they’re famous among enthusiasts and rockstars for their authentic tone, gut strings have a few flaws. For instance, they’re expensive and break easily. So expect to replace your strings often if you’re not careful!

To sum up, ukuleles conventionally have four strings, but they can also have five, six, and eight strings. Each type is tuned differently, so they produce different sounds.

Also, the type of ukulele string affects its tone, so it’s important to know the materials used to manufacture strings and how they affect the instrument’s sound. The ones used on the market are nylon, steel, fluorocarbon, and gut.