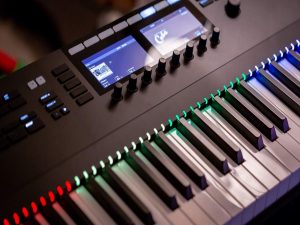 If you’ve decided to learn piano finally and you’re wondering what features to look for in your first instrument and how many keys there should be in a keyboard, then you’ve come to the right place. Once you follow this keyboard buying guide, you’ll be able to pick the best keyboard for yourself.

Buyer’s Guide to Buying a Keyboard

Suppose you’re a beginner, and you still don’t know whether you’ll stick with playing the piano. In that case, you’ll need a different keyboard from someone who’s seriously dedicated to becoming a professional pianist or a music composer.

Many factors can influence your choice, from your budget to your playing experience. So, it’d be best if you decided what you want to get out of your keyboard so you can make the right choice.

Various types of keyboards exist, from digital pianos to controllers and synthesizers. Each type is geared towards a specific function. However, lately, with the advancement of technology, the demarcation lines have blurred between all the different types.

First off, you’ve got the digital piano. This is the electronic version of a regular acoustic piano. This means that a digital piano has the same feel, sound quality, number of keys, and pedals as a non-electric piano.

The only difference is that digital pianos are more compact and have a lower price tag than their acoustic counterparts.

A digital piano is much smaller and lighter than a grand piano and even an upright piano, making it highly portable. Some digital pianos even come with a way to connect to external speakers so that the sound can resonate within a large, crowded room during a stage performance.

If you’re looking to play in a band or produce music, a synthesizer is the way to go. Despite their small size, synthesizers can generate a large variety of sounds, anything from electronic musical instruments like basses and electric pianos to random sounds like claps or sirens.

Nevertheless, since they’re usually smaller than other keyboards and don’t have weighted keys, a piano student will soon outgrow the capabilities of a synthesizer. Accordingly, synthesizers are only good for beginners but won’t work for intermediate and advanced pianists.

A workstation keyboard is a step-up from synthesizers. Think of it as a musical keyboard and a computer all wrapped up in one.

On a workstation keyboard, you have numerous sound samples and the options of sound synthesis, music sequencing, and computer interfacing. You can also attach filters, add sound effects, and record, by adjusting its numerous knobs and controls.

All those features make this type of keyboard ideal for producing and composing music. However, they don’t come cheap. Workstation keyboards tend to be on the pricier side, and most come with weighted keys, which makes them great for advanced keyboard players, but further raises the cost.

A controller keyboard, also known as a MIDI controller, can’t produce sound on its own.

Instead, once you press its keys, it works by transmitting MIDI data such as the velocity, length, and pressure to a computer or another keyboard through a MIDI or USB port. The other device then interprets said data and produces the sound.

Finally, an arranger keyboard is made for musicians who wish to practice playing with auto-accompaniment.

It can provide various accompaniment styles that suit the piece or song you’re playing. Accordingly, the musician can play piano by himself but still have an idea of how his playing will sound with another instrument by playing with a backing track that has its own key, tempo, and tune.

The backing tracks of an arranger keyboard also allow composers to complete the accompaniment of their song in the style they want, without having to find the respective professional musicians of all the musical parts.

Generally, arranger keyboards are pretty affordable, making them a good choice for beginners and people on a budget, especially the lower-end ones, commonly known as portable keyboards.

3. Look at the Different Features Offered

Most keyboards come with either 66, 72, or 88 keys. Most beginners will do just fine with 66 keys; however, as they progress, the keys will become insufficient as the pieces become more intricate  and complex.

Thankfully, 72 keys are enough to play most pieces out there, but certain advanced pieces have extremely low or high notes that need a more extensive range. That’s why professional keyboards, particularly digital pianos and workstation keyboards, come with the full 88 keys of acoustic pianos.

Still, many digital keyboards come in sizes smaller than 66 keys, accompanied by a lower price tag. Again, these keyboards will only be suitable for children and people who aren’t sure if they’ll continue with this instrument down the road.

The key action of electronic keyboards is classified into three types: full-weighted, non-weighted, and semi-weighted action.

To illustrate, a fully-weighted action keyboard, aka hammer action keyboard, has the same weight as pressing on an acoustic piano, resulting in a natural feel. As such, the hammer action keys are perfect for future classical pianists who will eventually play on a real piano. However, the heavy keys may not suit players who suffer from carpal tunnel syndrome or joint problems.

Alternatively, unweighted keys are found in a beginner keyboard or synthesizer, where realism isn’t crucial. Here, the keys are light and responsive, which decreases the overall weight of the keyboard and makes playing fast, repetitive notes reasonably easy.

Lastly, the semi-weighted keyboard action is between the other two types, where the keys are still considered light but offer more resistance. This allows performers to play both non-piano and piano sounds and is usually present in workstation and arranger keyboards.

4. Choose the Accessories You Needs

An electronic keyboard isn’t the only thing musicians need to play the music they want. They may also need other accessories like the following:

Don’t just blindly purchase any digital piano or keyboard whose features and price you like. Instead, ask those who know about keyboards for their opinion and listen to their suggestions.

If you’re buying online, then carefully read the reviews on the different keyboards you’re considering. Digital keyboards and pianos don’t come cheap, so make sure you’re not putting your money in the wrong place.

6. Try it out Yourself

Once you play something on a digital keyboard, you’ll get a feel about whether it’s the right one and discover what you like and dislike about it.

Therefore, testing out a keyboard is crucial, especially when you’re buying a used keyboard. In such a case, you should always check to see if it’s still in good condition and functioning well.

Moreover, testing a new instrument may allow a salesperson to recommend other keyboards better suited to your needs. Just make sure that they don’t affect your decision too much; otherwise, you may live to regret your choice for years to come.

Whether you want to play songs or make your own music, you can find a good keyboard as long as you know what to look for. Since each keyboard has its function and advantages, we can’t say that any one type is considered the best keyboard.

By deciding what your end goal is, you’ll be able to choose the right keyboard.