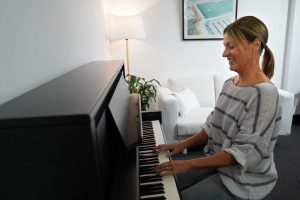 Learning a musical instrument can be extremely difficult; however, learning to play the piano isn’t all that hard, especially for beginners. Not only do you not need to tune pianos and keyboards constantly, but they’re also relatively straightforward. Now, playing piano may not seem so simple when you watch expert jazz or classical pianists.

However, when you understand how a piano works and put in the necessary effort, you’ll be able to play almost any song or piece you like. So, what steps should you follow to play the piano well? Keep reading, and you’ll find out.

To learn how to play piano, you first have to know the basic musical notes and then find the corresponding piano keys. Then, you should practice using all the fingers of your right hand, followed by the left hand, and then both hands together.

Finally, it would help if you learned how to read sheet music and start practicing simple songs, gradually progressing to more complex pieces. And always remember that you can’t learn piano in days, but, with time and regular practice sessions, you’ll be able to play the piano quite well.

How to Go About Playing Piano

The first thing you should know before you learn how to play piano is how to sit while playing. Unfortunately, many piano students, self-taught or otherwise, don’t bother learning how to sit with a good posture. However, a good posture can make quite a palpable difference, in both the student’s playing and sense of comfort.

So, when you come to take a seat in front of the piano, sit with your back straight and don’t hunch over. Also, make sure that your seat isn’t too high or low. Ideally, your feet should be flat on the ground, each forearm isn’t almost parallel to the floor, and your fingers are slightly bent as if you’re cupping a ball.

If you’re not sitting like this, know that your seat’s level isn’t ideal and that you should definitely adjust it.

Most western instruments, piano included, have seven main notes that come together to make a song or piece. These notes are typically known as A, B, C, D, E, F, G, and, in some parts of the world, they’re known as Do, Re, Mi, Fa, Sol, La, Si (Ti). (Remember that Sound of Music song?)

On a piano, these seven notes are located on the white keys, and once you’re through with a set of seven, the same notes repeat once again in the same order, increasing in pitch as you move from the left to the right of the piano.

3. Learn the Location of the Musical Notes on the Piano

So, among the numerous white and black keys in the piano, which is a C and which is a G?

Well, once you understand the pattern of the piano keys, you can find any note in less than a second. Basically, you have a set of two black keys sitting next to a set of three black keys, followed by two, three, and so forth.

To find the C, you should look for two black keys and press the white key on the left of the set, and there you have it; that’s your C. The D will be the white key on its right, E is one more white key to the right, and you’ll keep moving up until you reach B, which is the final note located before the brand new C.

Typically, you’ll hear something called a middle C or sometimes a C4. This is simply the C located in the middle of the piano or the fourth C you’ll find from the beginning (left side) of the piano.

So, now that you know where to find each note, it’s time you know how to play them. In piano, we use all of the fingers on our hand, not just one or two.

Once you place your fingers on their respective keys, you should sequentially press the five keys. Then, practice going up and down these notes until you become used to the movement.

Once you’re familiar with moving your right hand, place your left hand with the pinky (5) on C, and perform the same up and down movement till it becomes easy and comfortable.

5. Learn How to Read Sheet Music

As moving your hand becomes a bit more natural, the next step in learning to play piano is knowing how to read sheet music. Now, while some people have perfect pitch, aka the ability to hear melodies, immediately know which notes they’re made of, and play them, not everyone is blessed with such an ability.

That’s when reading music comes into play. Not only does it help us know which notes to play, but it also tells you the rhythm, dynamics, and so many other things crucial to a piece of music.

For now, you should know that all musical notes are written on what’s known as a staff. This staff consists of five parallel horizontal lines, on which the notes are depicted as circles. For piano players, you’ll almost always find two staves connected by a bracket. The top staff represents what should be played by the right hand, and the bottom one is for the left hand.

The notes are either written on the lines or between them. You can also write the notes above or below the staff and use something called ledger lines. However, beginners should mainly focus on the five lines and four spaces within the staff and progress to ledger lines as they become more proficient at reading and writing musical notes.

Now, when you look at how the notes are written, you’ll find that it’s pretty easy to understand. Basically, consecutive notes are written on a line, then the space above it, then the line above it, and so on. So, if you know that E4 is placed on the first/lowest line of the staff, then F4 will be in the first space, G4 on the second line, A4 on the second space, and so forth.

To wrap up this part, know that notes can have different values according to their shape. So, for example, a blank circle represents a whole note, a circle with a stick is a half note, and when this circle is filled in, it becomes a quarter note.

Once you’ve slightly grasped how to read sheet music and move your fingers, you should test your progress by playing your first song, preferably something simple like Happy Birthday or Twinkle Twinkle.

Keep practicing that song until playing it becomes as easy as breathing, and then move on to a new, but slightly more complex piece. One by one, you’ll find yourself developing your skills and techniques, and one day, you’ll be able to reach your piano-playing goals.

7. Start Using Both Hands Together

In the beginning, when all students learn to play piano, they only play with one hand, usually the right. However, all pianists should play with their left hand as well. This hand is usually responsible for playing the harmonies and needs a lot of practice to master as it’s often the non-dominant hand.

After you learn to play with each hand, you should start moving them together at the same time. This may be tricky at first, as each hand will usually play different notes with different rhythms. Nevertheless, if you start simple and repeat the hardest part, you’ll eventually get used to the simultaneous hand movements.

Besides the notes on the staff, you’ll also find other symbols and shapes that have significant meanings. For instance, you’ll find at the beginning of each staff either a treble or bass clef.

You’ll also find the key signatures that’ll tell you which key a song is in, as well as the time signature that indicates how many beats per measure there are, where each measure is separated from the next by a vertical line.

You’ll also find things called accidentals which designate which notes should be sharp or flat. Furthermore, you’ll find things like ff, mf, cresc., and p, which indicate the dynamics of a song, aka how loud or soft you should play some notes.

There are countless other symbols and words that indicate many other criteria, like a piece’s tempo, phrasing, ornaments, etc. However, don’t be overwhelmed or discouraged if you don’t know what a certain word or shape means, and know that you’ll come across them all as you learn to play piano.

Now, if you follow the previous steps, you’ll be able to play most of the popular songs as well as some simple classical pieces. However, when you encounter more challenging and technically demanding pieces, your hands may not be able to keep up with the strings of notes. That’s because you lack the skills and techniques needed to play those pieces.

However, you can counteract this problem by doing piano exercises and learning how to play scales and their arpeggios, both major and minor. Scales are a series of eight notes, starting with a specific note and ending with it. As you move up a scale, you can play only white keys or a mixture of black and white notes, depending on what scale it is and whether it’s major or minor.

On the other hand, arpeggios are a series of four notes, also beginning and ending on the same note. The first three notes of an arpeggio make up a chord, and chords are customarily used to harmonize a melody.

By practicing scales and arpeggios, you’ll develop the dexterity and strength needed to shift your fingers and make difficult jumps effortlessly. Moreover, you’ll learn what notes should be flat or sharp in a specific key, as well as which chords will suit a melody you’ve heard or composed.

You’ll also come to learn something called the circle of fifths, which is an integral part of a pianist’s musical education, and specific chord progressions that’ll make building any harmony a piece of cake. So, start to practice with the C major scale and follow the circle of fifths to play the next scale until you come full circle.

10. Learn from the Experts

The last and final step for anyone who wishes to become a proficient piano player is to take piano lessons. Sure, self-teaching from online resources, videos, or even a piano app, program, or website is great and inexpensive; however, it can only get you so far.

That’s why it’s best that all piano beginners have someone to teach them what they don’t know and provide guidance and clear instructions.

So, whether you’d like to take online or traditional piano lessons, make sure to attend at least a couple. You’ll find yourself learning important skills like ear training, sight-reading, music theory, and so much more. You’ll also have some to track your progress with each lesson/session, and you’ll find yourself becoming a good player in a very short time.

Learning piano can seem difficult to an absolute beginner, be it a child or an adult. However, by having a good knowledge of the basics from the right resources and teachers in addition to some hard work, all piano beginners will become decent musicians who can sight-read and cover songs.