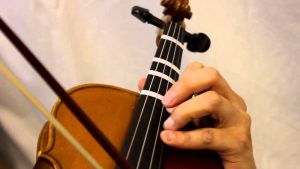 There are two important exceptions to that though. Those exceptions are scales and arpeggios

A scale is simply an ordered set of notes. Most often the first and last notes of a scale are the same and they span an octave. There are many different kinds of scales, but in this article we’ll discuss the most used scales. When the scale is ordered by notes of increasing pitch it is called an ascending scale. When it is ordered by decreasing pitch, it is called a descending scale.

Why Scales Are So Important

For almost all music, scales make up the foundation of the piece. Each piece is written in what’s called a “key”. The scale represents the foundation for which a piece of music is written. Most of the notes in a piece will be made up of the scale that represents the key the music is in. If you know, and are very familiar with all of the notes in the scale, you’ll have a good foundation for playing that piece of music.

It doesn’t stop there though. The foundation of learning about how music is created, what we call music theory, all begins with the scale. Learning all the scales will help you to be technically a better musician, but it will also allow you to understand the music you are playing much better. If I was learning a new instrument, one of the first things I would learn is my scales in every key.

To understand how scales are constructed, you first need to understand simple intervals. An interval is the distance between two notes. This can be most clearly understood on a piano. Going from one note to another is called a half step.

This is far from a comprehensive overview of intervals, but it will suffice for understanding the most basic of scales.

If you want to learn scales, it may feel a little overwhelming. There are a lot of them. To get started let’s look at where to focus your attention.

Start on any note, then go up with the pattern W-W-H-W-W-W-H. If you want to play a descending major scale, you would need to reverse the pattern.

You can find a list of all major scales here

The minor scale is special in that there are a few different iterations of it that composers use. Let’s look over the major three.

You can find a list of all natural minor scales here

The harmonic minor scale is the same as the natural minor scale with one exception. The 7th note is raised by one half step. The harmonic scale evolved out of the common harmonies composers would use in pieces written in minor keys. You’ll often see the raised 7th note raised in minor pieces of music to reflect this harmony and scale.

An example of the C harmonic minor scale is found below.

There are 12 of them, so it may take you a little while to learn. It’s important that you learn them well. It’s not enough to just be able to play them once, ascending and descending. You need to become intimately familiar with them.

In order to say that you “learned” a scale, it should be memorized, and you should confidently be able to play it at a fairly fast tempo. Once you can do this, you should feel free to move on to the next scale.

After learning all of your major scales, you should work on the natural, harmonic, and finally the melodic minor scales, in that order. Like the major scales there are 12 of each form of minor scale, but they are all pretty similar. Once you have the foundation of the corresponding major key, learning the minor keys will not be as difficult.

Learn a Scale a Week

Take a week and become intimately familiar with the chromatic scale. Play it ascending and descending. Work on it in different rhythms and with different articulations. Play it slowly, and then play it fast as well. You should play it from the lowest octave on your instrument to the highest. If you’re a pianist, scales are typically practiced in four octaves. I would suggest spending no more than 15 minutes a day in this initial scale learning phase.

After you spent a week on the chromatic scale, move on to the major scales. Add one major scale every week. After your major scales you can start learning the minor equivalents. Although there are three different minor scales, since you already have the foundational major scale learned, learning all three during a one week period shouldn’t be too difficult.

If you practice in this way, you’ll know the chromatic scale, and all of the major scales on your instrument in 13 weeks or just over 3 months. Add another 3 months for the minor scales. If you’re consistent, you will have learned all of your important scales in just 6 months.

To understand arpeggios, you must first understand what a chord is. A chord is a set of notes, most often 3 or more notes, that are played simultaneously. The most common chords are the major and minor chords. These chords are built from the first, third, and fifth notes of their corresponding scale.

You can learn the arpeggios at the same time that you are learning your scales. Learning your major and minor arpeggios will give you a very strong harmonic foundation for understanding chords and chord progressions. Arpeggios are found often throughout music as well, so you’ll be able to apply what you learn often to the music you are working on.