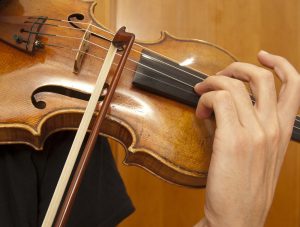 Technique is often the most practiced skill for young musicians. Many musicians practice it inefficiently, though, which can lead to frustration. Often heard complaints in the practice room include “Why can’t I get this passage up to speed?” or “I can never seem to play this section without mistakes.”

These complaints can be largely resolved by practicing small groups of notes at a time. This way of practicing is not often taught to students, but it can resolve just about every technical complaint quickly.

If you’ve always struggled with technical passages, or your students have a hard time with them, read on.

It’s important that we have a proper definition of what I mean by technique in terms of this article. For different instruments, and different contexts, technique can hold different meanings. For a singer, technique may refer to where in your body you are producing sound in order to make the best sound possible, and avoid injury.

This is not the type of technique I’ll be referring to. Technique, as I’m using in this article, is the technical facility of a musician to play a difficult passage of music accurately. Sometimes understanding it from the perspective of another skill is helpful. Technique for a golfer is how they hold the club. It also includes the strength with which they hit the ball and the way they move their body.

A musician’s technique, to be effective, must be automatic. For every instrument there are similar physical motions that must be learned before playing difficult sections of music.

For the purpose of this article we’ll be discussing practicing difficult passages in music. Practicing in small groups can also be applied to technical exercises, but I suggest that all techniques can be learned in the music that you play, and technical exercises, with the exception of scales and arpeggios, are often not needed.

Don’t Play From the Beginning

The first thing that must be said is that if you’re working on technique in a piece of music, you should not be playing from the beginning to the end with hopes to become better. You may have heard this many times from your teacher already. Playing from the beginning of the piece is a great way to practice performance. In the case that you need to work on a section that you’ve never been able to play up to tempo, however, you should start where the difficulty begins.

Working on a Small Section

Just as important as knowing where to start practicing, you also need to know how large of a section you should be practicing.

How Small of a Section

For demonstration purposes I’ll be using Fantasie Impromptu by Fredric Chopin. Although I’m using a piano piece as an example, this method can be applied to any instrument, including voice.

I think we can agree that the music below is the first theme of the piece.

Now we’ve broken the first theme into three distinct runs. So far so good. Now you have a much smaller section that you can work on using all the different tools we’ve talked about above.

Will this work? Sure it will. But again you’re not thinking small enough. Let’s take it a step further.

If you’ve ever listened to your teacher, you know that you should be practicing what you can’t play correctly yet. There’s no need to practice something you can already play well.

I bet there are movements in this measure that aren’t difficult for you. Just because the run is difficult, it doesn’t mean every part of the run is. If you’re a pianist, and this seems within your grasp, try playing the first four notes of the above passage as fast as you can.

It’s probably not too hard for you. We now know those four notes are not the ones causing problems in the measure. So you shouldn’t have to practice. If you practice those first four notes, you’re wasting time because you can already play them.

Many people will find going from the fourth note to the fifth note a problem. You have to put your thumb under your fourth finger here. The thumb needs to land on the A without an accent. It also has to be a legato move from the F# to the A. Depending on your pre-existing technical facility, this may be the hardest movement for you. If that’s the difficult part for you, why play the first four notes? Don’t! Practice moving from the F# to the A only.

Your hand should be open, the way it would be if you played the four notes before it. If you have to play through those first few notes to understand what your hand should look like before practicing it, then go ahead. But only once. Just make sure you don’t spend a lot of time on it.

Now repetition comes into play. You need to repeat those two notes over and over again. Don’t limit yourself to practicing these repetitions slowly.

Because we’re only talking about two notes here (one movement), you can play it faster than you’ll need to when you’re playing the real piece. You should actually try to play them as fast as you can. By playing them as fast as you can, you are teaching your body the correct movements at a speed faster than you will even eventually need. Because there are only two notes, you can also be perfectly accurate.

This will teach your body the correct movement, and eventually those two notes that were tripping you up before, will be as easy as the first four. In order to practice this way, however, you need to make sure you don’t play too many repetitions.

Consistency is key here. You won’t perfect a small group in one sitting. You’ll need many days of practice for that. This is because most of your learning will be done while you’re sleeping. Yes, sleep is required to learn any piece of music.

Do you see the benefit of practicing in this way though? You can practice the technique for the entire piece of music in literally minutes. You’ll find there are only a handful of movements that are causing difficulties, and you should be working specifically on those movements and ignoring the rest.

When I tell my students to practice this way, I have them circle each group of notes that are causing them difficulties. Then they go to those circled notes before they practice the piece for the day. Practicing techniques in this way can really speed up the time it takes to learn difficult passages.

Remember This is Technical Practice

Before you jump all over me, I’m not insinuating that you only need to practice these technical groups of notes. Technique is just one piece of the puzzle. You also need to work on dynamics, articulation, phrasing, and much more. For other types of practice you’ll need to play larger sections, so phrasing can make sense, and you can make music. But when it comes to learning a motor skill, practice in the smallest sections possible.

You should always make sure you are using your time as efficiently as possible. A couple of seconds of simple music repeated over and over again can turn into hours and hours of practice time. By focusing on smaller groups, you’re not just saving the time it takes to play movements you already know, you are limiting what your brain has to think about, so that you can focus on the most difficult parts without having to be distracted by simple music.

As you practice this way, you’ll find that your technique will get better as if by magic. It works. Try it out.