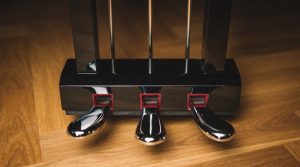 Finally, they evolved into the foot pedals we know of today.

By far the most used pedal is the damper pedal. It is often also called the “sustain pedal”. I prefer to call it the damper pedal because it can often be confused with the sostenuto pedal, which is a different pedal entirely.

The damper pedal is the pedal furthest to the right. When the damper pedal is being pressed down, every note that the pianist plays will keep sounding until they naturally stop vibrating. This pedal is often used to get a connected and flowing sound out of the piano. That’s the simple explanation, but we need to take it a step further to understand what is actually physically happening within the keyboard when the damper pedal is depressed.

Notes played on an organ continue as long as a key is pressed. Pianos don’t work this way. No matter what the pianist does, each note has what’s called a “decay”. After a note is pressed the sound will get continually softer, or decay, until the string is no longer vibrating. Most often, though, the note is manually stopped before it fully decays. In order to stop the sound of a note, dampers are needed.

A damper is a piece of wood with felt attached to the bottom. When a piano is not being played, the dampers touch each string of the piano, so that the strings will not vibrate, and no sound will be made. In the picture below the black pieces of wood with the felt on the bottom are called dampers.

When any key on a piano is pressed, a small wooden hammer moves up to hit a string (actually up to three strings, but we’ll get to that later). When it hits the string, the damper is immediately lifted off the string, so the string can vibrate and the note will sound. When the pianist releases the key, the damper falls back to stop the string from vibrating, thus stopping the sound.

Now that you know what a damper is, you can probably guess how the damper pedal keeps the sound going. Yup, it just lifts the dampers off of every string. As long as the damper pedal is pressed down, each damper will stay raised and the sound of the note will only stop when the sound fully decays.

The piano by design can play quite a few notes at once. We only have so many fingers. In order to make sure notes sound connected from one to another, or legato, the damper pedal is often used. This pedal is used so much on the piano that most pianists just refer to it as “the pedal”.

To say that the damper pedal just holds notes out longer is missing the bigger point. It does more than that. Using the pedal enables the pianist to use sympathetic vibrations.

The other strings that are sounding are not as loud as the notes that were actually played, so it may not be immediately obvious that this is what’s going on. If you pay attention, though, the effect on the sound is clear. The piano is louder and more brilliant with the pedal depressed. This is true even when just a single note is played.

Try it out. Play one note without using the pedal. Now press down the pedal and play the same note. Is there a difference? Try it again with a bunch of notes at the same time. You’ll find there is a bigger difference when more notes are played.

It’s important to understand this phenomenon. Sometimes, even when a piece needs to be legato, a lighter sound is needed which is a good reason not to use the pedal. There are also times a bigger sound is needed and there’s no reason to play legato. At these times the pedal can often be used to make a bigger, more brilliant sound.

The pedal on the left is called the una corda pedal or soft pedal. I prefer una corda because it’s the term most often used in written music, and because the term “soft pedal” does not accurately describe its use.

Una corda is Italian for “one string”. When Christofori invented the piano, there were two strings for each note just like the piano’s cousin the harpsichord. The una corda functions by literally shifting the entire keyboard and action over so that the hammer plays on only one string. The obvious result of this is that the sound would be softer. Modern pianos typically have three strings for every note (with the exception of bass notes having one or two strings but much larger). When the modern day pianist uses the una corda it may be better termed as “Due corda” as the hammers hit two strings, not one.

Using the una corda is not about playing softer. Playing softer is one effect, but soft playing can be done pretty well without the una corda. This is not to say you can’t use it to play softer, but it should be used very sparingly.

The biggest reason the una corda is important is because it changes the tone or timbre of the piano. Harpsichords and organs have stops that can change the timbre (sound quality or character) of the instrument. With the exception of the una corda pedal, the piano is lacking in this area. There is nothing else pianists can do to change the timbre or tone of their instrument.

If all it does is move the keyboard to play on fewer strings, how does this change the tone of the instrument? The answer has to do with the hammers.

After extended use, the felt on the hammers become indented and packed down at the location where the hammer hits the string. When the una corda is pressed, however, the hammer is hitting the string with a different part of the felt. A softer part of the hammer. It’s a part of the hammer that hasn’t seen as much use. This creates a softer tone. It makes the piano in and of itself actually sound different, not just softer.

On an upright piano the left pedal is actually not an una corda at all. A better term for it is the half-blow pedal. The action of an upright piano cannot shift from one side to another because of the way an upright piano is made. The “half-blow” pedal moves the hammers closer to the string. This makes a softer sound, but not necessarily a different tone.

Most modern brands will also have a middle pedal called the sostenuto pedal. This pedal holds dampers up of notes that were being played before the pedal was pressed. Only the dampers of these notes stay up. This way the pianist can hold one note while playing many others without the need to lift all dampers at once.

The middle pedal on many upright pianos is actually not a sostenuto pedal but a practice pedal. If you have a piano where the pedal can push down and move to the left, it is likely a practice pedal. It can be pretty useful. When it is pressed, a layer of felt is put between the strings and the hammers. It wouldn’t be used in performance, but it is great for practicing. It muffles the piano, so you won’t bother everyone in the house with your practicing quite as much.

That’s what the pedals on a piano do. Hopefully their uses should seem pretty straightforward now. There is so much nuance to how they (especially the damper pedal) are used that books have been written on it. In a future article we’ll look into the more nuanced approach to piano pedaling, but understanding how they work is an important first step.

The typical modern grand piano has three foot pedals. In contrast to an organ, these pedals aren’t used to play any notes. They are used to adjust the way the piano plays. When the piano was first invented, some of these pedals were created as “stops”, which are little levers you would pull with your hand. A pianist typically needs both hands, so they were later moved to knee levers during Mozart’s time.

Finally, they evolved into the foot pedals we know of today.