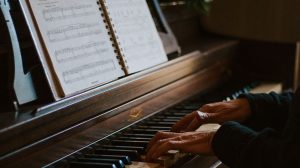 When I started to really get into practicing piano, I bought hundreds of CD’s full of piano music. I had this desire to hear what was out there. I would listen any chance I got. I was always reading as much as I could, and if there was ever a time that I heard of some music I wasn’t familiar with, I would get out there and buy a few more CDs.

I didn’t know what the staples of the repertoire were. I just bought everything. I would have loved to have a simple list of pieces I should go listen to. So that’s what I’m trying to create here.

The list below is in no way exhaustive. There is so much piano repertoire out there that just listing everything would not be very helpful. Instead I would like to break down the staples of the repertoire and let you know what you need to focus your listening on if you don’t have a lot of experience with piano music.

The composers listed are in order of birth. I’m not going to rank these pieces by difficulty. The point of this list is to help familiarize you with piano literature. It’s not about finding music you want to play. After familiarizing yourself with a lot of music you’ll begin to know for yourself how hard a piece is for you without some arbitrary rating.

The pieces on the list are primarily those that are often performed publicly.

Notable Pieces or Collections by other Composers

Remember, there is so much piano literature that it would take a large database to categorize it all. The point of this list is to give you a starting point on finding music to listen and learn about for the piano.

If you become familiar with this list you’ll have learned enough to do well in most undergraduate piano literature classes. These are the staples of the repertoire. Listen to them often. You’ll find the more you listen, the more motivated you are to practice.

I purposely didn’t include some of the “famous” pieces like Fur Elise and Canon in D. These types of pieces aren’t often played in professional concert stages, and almost everyone is already familiar with them.

There are also some “gems” that I personally love that aren’t played very often. I’ve left these types of pieces off the list as well, as I wanted to stay focused on the staples of piano repertoire.

I’m sure I have some glaring exclusions on the list. If you can think of any obvious composers or pieces that should be included, let me know in the comments.