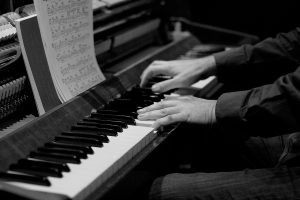 If you’ve read around the internet, including this blog, muscle memory for musicians often gets a bad rap. It’s the worst kind of memory. Muscle memory causes memory slips, and you should never rely on it. It’s a horrible no good very bad thing! Avoid it at all costs.

None of that is true. Muscle memory is actually needed more than any other type of memory. It’s just easy to acquire.

What Exactly Is Muscle Memory?

Muscle memory is referred to with many different names outside of music. Implicit, procedural, and non-declarative memory are all synonymous with “muscle memory”. All of these terms refer to the long term memory that helps us perform motor skills like walking, riding a bike, or playing a musical instrument. This type of memory does not require conscious thought.

Sure you can stop and do the math and then go back and think about what you did on Saturday, but you couldn’t do it at the same time because both require conscious thought. Now, try to do the math problem in your head while playing a piece on your instrument that you know well and have memorized. I bet you can figure it out.

Why? Because playing an instrument uses muscle memory and doesn’t require conscious thought.

You can only actually think about one thing at a time.

Does Every Musician Use Muscle Memory?

How to Get Muscle Memory

Muscle memory can fail. Does a phone go off? Maybe you made a small mistake? Is someone coughing really loud? Even though you aren’t using conscious thought, if something happens that is out of the ordinary, you can forget what comes next. If you’ve ever had a memory slip, you depended solely on muscle memory.

Something happened and you couldn’t start back up. Like I said earlier, muscle memory is not bad. Without muscle memory playing an instrument well would be impossible. The reason it gets such a bad rap, though, is because it’s easy to abuse. A lot of students use 100% muscle memory to play their music.

No One Uses 100% Explicit Memory to Play an Instrument

Does anyone sit down and read the music they memorized in their head without any muscle memory? Good readers don’t read note by note. They read movements. If it’s a practiced movement, a good reader would see a group of notes and know immediately how to translate that group of notes into movements on their instrument.

How do they do this? Using muscle memory. The visual page serves as a cue for muscle memory. A musician that memorizes a piece well uses muscle memory during pretty much an entire piece. A good memorizer can cue themselves with explicit memory. They’ve memorized what the music looks like on their instrument, or the page of music, or they have a good enough ear to repeat what they hear. One of these types of memory should be present to cue the muscle memory of the musician.

The explicit memory serves as a cue for when muscle memory fails, or when the musician just wants to think more deeply about the music while they are playing. It’s important, and it’s something that a lot of students miss out on, which is why it is discussed so much.

You may actually want to try to avoid gaining muscle memory. That may sound counter-productive considering I just told you you’d use it almost entirely to play a piece by memory. The reason I say try to avoid it is because some musicians think they need to “gain muscle memory”, so they’ll make mindless repetitions over and over again.

Sure you’ll gain muscle memory that way, but you won’t gain anything else. Because you weren’t thinking, you probably put some bad habits into those repetitions as well. A better way to go about learning is to always be thinking. Always strive to practice more efficiently. Include your brain in every repetition you make. Was the repetition you just played at the right speed? Was it accurate? Did you use the right articulations, dynamics, fingering, bowing, etc? If you didn’t do everything correctly, make it better the next time you repeat it. If you did, make sure you pay attention and keep that up.

During each repetition you should try to memorize it explicitly as well. What does it look like when you play it on your instrument? What does the music look like? What does it sound like? What chords, intervals, and patterns are you playing? By putting these things to memory you are building your explicit memory, while working on muscle memory.

You see, because muscle memory doesn’t take thought, you can learn other things while acquiring it. Don’t practice mindlessly hoping you’ll get muscle memory. Practice with your mind and you’ll acquire muscle memory whether you want to or not.

It’s important to realize muscle memory isn’t the only answer, but being afraid to play something with muscle memory is also not the answer. It’s only in combination with other forms of conscious memory that muscle memory really shines.