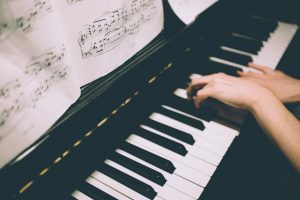 Serious musicians can practice for 4 or more hours every day. The idea is that if you practice more, you’ll progress faster. It makes logical sense. If you practice for 4 hours, you will progress 4 times faster than the person who is only practicing one hour. It doesn’t always work that way though. The musician that practices for 1 hour efficiently, can easily learn more than a musician that practices for 4 hours inefficiently.

Can you learn how to practice and cut your practice hours down to almost nothing? If you want to progress at the same rate you are now, then sure. I prefer to progress as much as possible. I want to practice as efficiently as I can, but also as much as I can. If you add time and efficiency together, you’ll end up with progress many times faster than what you are probably achieving now.

Franz Liszt apparently told his students to read a book while practicing. The idea is that there is a technique that your body just has to absorb. By reading a book, you can get your mind off the tediousness of practicing technique while your body absorbs the correct movements. Liszt, Liszt, Liszt… I’m afraid I have to disagree.

Practice must be mindful. Too many musicians sit down with their instruments and play mindlessly. Do you warm up while thinking of that big test you have coming up? Do you work on scales while thinking about what you’re going to have for dinner that night? Do you mindlessly play through a section of music you’re working on because you just have to “do your repetitions” for the day? This is never, yes never, an effective way to practice.

What to Focus On

Practice is often about repetition. It just is. This repetition can get tedious if you’re not focusing. If you have to repeat the same section over and over again, what is there to focus on? Focus on exactly what you’re playing. Music is difficult, you’re often doing many things at once. You need to think about articulation, dynamics, notes, rhythms, posture, and more. With each instrument there are individual aspects of playing that you need to pay attention to.

If your practice is on autopilot, you are simply doing it wrong. You may be playing the notes and rhythms correctly, but I bet you aren’t thinking about articulation or dynamics. Often I hear students repeating a section over and over again ad nauseam. The repetitions that are non stop, with no breaks in between, are ineffective because you don’t have any time to think about how well your repetition was played.

You need to take some time between each repetition to realize what you did right and what you did wrong. It doesn’t have to be a lot of time, it can be less than a second, or it can be a couple seconds. By taking time between repetitions you’re forcing yourself to focus on the task at hand. Each break is a reminder to think about what you’re doing.

Don’t Spend Too Long On One Section

By section I mean whatever it is that you are repeating over and over. This may be a couple of measures, or it may just be a couple of notes. Most of your progress will come after a good night’s sleep. Sleep is the best way to practice. If you over practice one section, you’re not doing anything other than losing focus and potentially ingraining bad habits when you stop paying attention.

If you are just repeating a section over and over, you probably don’t need more than 5-10 repetitions.

The reason so many people repeat one section of music too many times is because they want it to be learned now. You won’t feel comfortable with new sections of music until you practice for a few days and get a good night’s rest. Practice to the point where you feel better about the section but not necessarily perfectly comfortable.

Then move on. You’ll find that the next day the music will be a little better than it was the day before. The same will be true for the day after that, until you feel like you can’t make a mistake anymore.

Focusing doesn’t matter if you don’t know what to practice. You must have a plan. Imagine how much time is wasted by trying to think of what you’re going to practice for the day. Have you ever played through old music or sight read for fun just because you didn’t want to actually practice? If you added up all that time wasted, how much practice time have you lost?

Don’t Play from the Beginning

First, because you’re playing such a large amount of music, you’re not focusing on anything. You end up playing through the music without actually practicing anything. Nothing gets better. You just get to have a little fun. This is more like playing than it is practicing.

If playing from the beginning is not good, the obvious alternative is to play sections instead of the entire piece. That section may be a phrase or two of music. If your music has rehearsal marks, maybe one rehearsal mark to the next.

This is a better way to practice for sure. What are you going to do with this section you found? Repeat it over and over? We’re getting closer to the right answer, but we’re not quite there yet. An entire phrase is almost always still too much to practice.

One major reason that you shouldn’t practice from the beginning is because you shouldn’t play music you already know. Take the phrase you’re having problems with and really think about it. Are you having trouble with every note in that phrase? I bet you aren’t. There may be an entire measure that you have no problem with. Why would you include that measure in your repetitions then? You shouldn’t.

Your goal should be to find the smallest possible group of notes that are difficult for you, and repeat those mindfully.

With that small group of notes we still must think about context. The only reason to play through parts that you know, is to add context to the music that you don’t know. If you’ve found a couple of notes that are causing you problems, work on just those notes.

But then you need to expand your practice out one note at a time both after the group and before the group. This way your body can understand better the context that those problem notes happen in. Be careful not to over expand the group though. You don’t want to work on music that you don’t have to work on.

When you’re first working on a piece, you need to make sure you work on the piece at an extremely slow tempo. By playing too fast right away you end up turning your brain off. Your brain can’t keep up with how fast you’re playing the music. It then turns off and you start to create muscle memory. Your brain isn’t active, so you end up missing a lot of the finer details of the music. The result is sloppy playing.

Fast practice is important, it just has to be done judiciously. After you have a good handle on the music at a slow tempo, you should find sections that you know will be technically difficult when they are sped up. When I say sections I mean small sections. Body motions is probably a better way to explain it.

Why Fast Practice is Important

Have you ever hit a speed wall before? A speed wall is when you can’t play a piece faster than a certain speed. It’s like you hit a wall. No matter how much you practice, you can’t get it any faster. These speed walls happen because whatever motion you use while practicing, is impossible to do at a fast tempo.

Slowly the motion might have worked just fine, but when you speed it up it’s uncomfortable and you can’t get past that wall. For this reason, you need to practice just a couple of notes extremely fast, so you can find the correct motion to play those notes with. After repeating that group (for a short time) you can move on. After practicing this way for just a few days you’ll notice a real difference in your technique in these sections.

This is just the tip of the iceberg. In a future post we’ll work on real music together. When I was young I used to practice 8+ hours a day inefficiently. I spent some time figuring out how to practice correctly and I found that I could learn the same amount of music in just a couple hours a day. If you’re devoting a lot of time to your practice, you should take some time away from practicing to try to understand how to practice. Your net progress will make up for your loss of practice time.