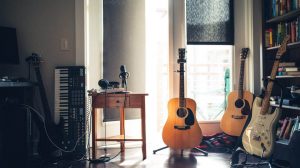 Do you sit down and practice your instrument, or do you just play it? Growing up, I don’t know if I knew that there was much of a difference. Practicing just meant that I was making music, or at least sound, on my instrument. Somehow I will get better. Right?

Both practicing and playing music have their place, but if you want to get better quickly, practicing is where you should spend most of your time.

What Does it Mean to Play?

Playing is fun. Playing is sitting down with your instrument and playing, often large sections of music, for fun. The piece doesn’t necessarily have to be learned very well, just the fact that you are playing from the beginning to the end, or in large sections, makes it easier to play and not practicing.

When you are making music, do you enjoy it? If you enjoy it, that’s a good indication that you are not actually practicing. I’m not saying that all practice is horrible. Some musicians love to practice. I don’t know that I’m really one of those. I don’t hate it, but I don’t love it. I love to play. Most musicians that I’ve known are the same way. Practice is hard work. Playing is fun.

An important distinction between testing and playing needs to be made. When you’re practicing a piece of music, it’s very important to know where you need to practice. What measures, beats, movements, or sections are giving you the most trouble? Sometimes it’s important to play through certain parts of a piece, or the entire piece, to find where you’re having difficulties.

This is playing with a purpose. I call it “testing”. Testing will often include playing large sections of music as if you were performing. When a mistake is made, most musicians will make a mental note and move on.

After the testing phase, practicing musicians can go directly to the parts of the piece that need the most work and practice those specifically.

Mental notes are fine, but a better way to use testing to its full potential is to stop when a mistake is made. Keep reading, I’m not suggesting you always stop at a mistake. This can cause issues with perfor

mance. There are good ways to stop and bad ways. Hold that thought. I’ll come back to it.

During a long piece there may be many sections that need help. If you choose to only make a mental note of all of these sections, it’s very likely that you will forget which sections need the most work.

Stopping to Work on Mistakes Immediately

When you stop when you make a mistake you can work on the section that is causing you difficulties over and over again immediately. Once you feel the section is better, you can continue testing the rest of the piece.

Many musicians practice this way, but there are two problems with this approach.

The first problem is that you may end up stopping in performance just like you did in practice every time you make a mistake. This isn’t an issue when you’re practicing, but stopping while performing is just about the worst thing you can do.

The second problem is the requirement to frequently test. Playing, testing included, is not the best way to improve. Testing is just a way to find mistakes. If you don’t write down where your trouble areas are, you’ll need to run an (unproductive) test every time you sit down at your instrument in order to find where you need to work for the day.

Don’t practice the mistake right when you stop. Mark it in your music instead. Be as specific as possible. Is it just a couple of notes that are giving you a problem? Make some marks on your music (with pencil) that you can recognize when you come back to the piece.

You won’t need to test to find where the problem areas are the next day because you already marked them in your music. After a few days of practicing you can test just that specific area to see if it got any better.

If you played it correctly in the test, you can erase whatever mark you made on your music. This way you’ll only have this specific mark on sections that you know still need work. This will limit the need to constantly test large portions of the music.

Another important distinction that needs to be made is playing is not the same as performing. There is one key difference, an audience. Having an audience present makes performing inherently different than just playing for yourself. All students can learn a lot from performing.

Before a performance you should actually practice performing.

Practicing performing doesn’t mean you can just play your piece over and over again. You want to create the actual performance situation as much as possible.

If you were just playing for fun, you could stop and pick up your phone or get up and get a drink in the middle of your playing. When you practice performing, you can’t stop. Recording yourself is also a good way to make your playing seem more like a performance.

Playing Helps You Improve at First

Playing is fun, so most people tend to only play when they start to learn an instrument. This isn’t the only reason most people avoid practicing though. When you are just starting out, you can learn and get better by just playing. Eventually you’ll hit a plateau, though, and you’ll only get better by deliberate practice.

What Does it Mean to Practice?

You are practicing when you are actually working on improving a piece of music. Good playing isn’t possible without good practice. Practicing your instrument is like a difficult workout for your mind. You should be mentally fatigued after practicing correctly.

You may think you’re practicing when you’re repeating the same section of music, or technical exercise over and over again. It doesn’t seem anything like playing, it’s not fun, and you’re working on just a specific part of music that you can’t currently play. Technically, yes you’re practicing. There is a big difference between practicing and deliberately practicing though.

If you just want to play music for the heck of it, and you don’t care about improving, then just play and have fun! There’s nothing wrong with that, you just won’t improve much.

If you’ve never read piano music before, and someone put Rachmaninoff’s 3rd piano concerto in front of you, there’s not much you can do with that. I’m not saying you can’t work on music that is beyond your level, that can actually be helpful. You have to understand it first though.

If you were to practice a piece far above your level, you would need to work on making sense of it before any meaningful practice can be done.

This is what separates the good practices from those that just fiddle around. Ideally, you would have a teacher next to you correcting your mistakes and giving feedback every time you sit down with your instrument. This is not very practical, though, so you have to be your own teacher.

Every time you make any repetition, you need to analyze how it felt and sounded, and what you need to change about your next repetition to do it better. Playing through repetitions mindlessly doesn’t help, but it can also cause you to form bad habits because you are not constantly analyzing your performance for mistakes.

The final piece of the deliberate practice recipe is repetition. You must repeat the small part that you are working on, a lot. It’s important to not over practice a section in one sitting though. Most of your progress will happen when you sleep on it. It’s better to practice many small sections each with a handful of repetitions, than it is to practice one section hundreds of times in one sitting.

When you play music, you’re often working through music you already know. When you’re practicing, you’re only working on music that you do not know.

Most students will begin a “practice” session by playing. The student might then try to focus on working on a section that is difficult in the music only to get mentally exhausted and then they go right back to playing. The net result of all this playing is a lot of wasted time.

Whenever I put time aside to practice, I make a commitment to myself that I won’t play at all. If I do “play”, it’s just for testing.

Is It Bad to Play?

No! We practice so we can play. I play a lot. Some people watch a lot of TV, I like playing the piano (ok, ok I watch a little TV too). I realize, though, that I’m playing for enjoyment. If my only goal was to get better, I would only practice deliberately every time I sat at my instrument. I find this unreasonable, though, and I think if everybody only practiced, you would have a lot of burned out musicians.

A Word About Improvisation and Sight Reading

The line between practicing and playing is blurred a little when it comes to both improvisation and sight reading. There are many parts to learning how to improvise and sight reading that you can sit down and practice in the same way as you would a classical piece of written music. In addition to this kind of practice, you also just need to do it often.

When it comes to improvising and sight reading, playing is a form of practice.

What do you spend most of your time doing? Is practicing your thing, or do you just play? Do you want to practice? I don’t want to practice, but I do it because I have a deep desire to be better than I am now.